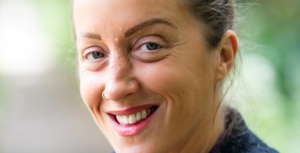 These are the words that Natalie (who likes to be known as Nat) uses when she describes the point she was at in her life when we first welcomed her to Hebron House. After years of substance abuse, Nat had experienced life on the street, in prison, she had been in countless dangerous situations, her children had been removed from her and taken into the foster system, and she had suffered in a deeply violent relationship. She had tried rehab a number of times but she believes she hadn’t hit rock bottom and had always gone through the motions to satisfy others – the courts, her mother, her loved ones. Never herself.

However, finding herself in prison and with Hepatitis C was her rock bottom and she begged for help. Social Services argued that it would be another waste of resources. Why would rehab work this time when it hadn’t before? However, Nat swore that a women-only facility would make a difference and so she was placed at Hebron House.

She was absolutely committed this time and knew deep down that it was her last chance for a normal life. “That’s not to say I didn’t act up!” She admits!! “I rebelled against the rules and didn’t understand why it had to be so strict. Of course, I understand that now and am so grateful to Hebron for everything they did to turn my life around.”

Sadly, soon after arriving at the house Nat’s children were adopted but even this devastating news didn’t deter her. With the support of staff, she was given the coping skills she needed to face the obstacles that life throws and the 12 Steps helped her to come to terms with her life. Looking back, she realises she was desperate to have a ‘real life’ again and rebuild her shattered relationship with her mum. She describes day to day life in the house as “full on” but she embraced it. She not only learnt valuable coping skills through therapy, workshops and the 12 Steps, she says she made amazing connections with the other residents and acquired basic life skills such as how to cook, washing, cleaning and generally being a responsible adult.

Once her programme was complete, Hebron helped her secure an aftercare house and continued to help her, with an aftercare package and regular therapy. She had access to group meetings and was escorted to hospital twice a week for her hepatitis treatment. “The team at Hebron could not have done more for me. They even came over to help when I had flatpack furniture that I couldn’t assemble on my own!”.

Nine years later and Nat is in a different world to the one she knew. She is in a loving relationship and is pregnant. Although it took some time to mend broken relationships, she has worked hard at that and is now closer than even with her mum, whom she describes as her best friend. And……

She works at Hebron House!

“I never intended to work with addiction – in fact I actively didn’t WANT to work with addiction. My intention had been to go to college and finish training as a hairdresser. However, my close connection with the team at Hebron meant that I was encouraged to volunteer, and having been a resident I could see that I offered a really valuable perspective for future residents. So I trained to be a facilitator and now I host workshops based in trauma, such as domestic violence, plus I facilitate 12 Steps groups. One of the things I quickly learnt with my own experience of rehab is the language – it is as if it is literally a different dialect. So I can help the ladies get through that as well.”

When talking about her own experiences, Nat is reflective and insightful “It’s all about owning your life and being accountable. Hebron House helped me to turn my life around and my life now is committed to doing the same for others.”